In a city once considered the most northern point with Norwegian residents (with Sami people inhabiting the land above), a delegation of the Norway-EU Science Diplomacy Network assembled for two days of immersive meetings and field visits during part of the Arctic Frontiers conference in Tromsø in May 2022.

Rasmus Gjedssø Bertelsen, a professor at the UiT The Arctic University of Norway and member of both InsSciDE and the EU Science Diplomacy Alliance, is the founder of the Network, aimed at enhancing Norwegian participation in InsSciDE and the Alliance and at sharing findings, resources, and networks of the Alliance with the Norwegian public, private, academia, and civil society. 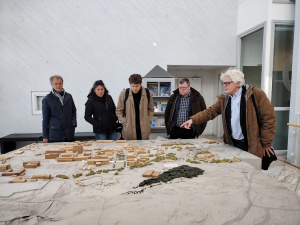 The delegation consisted primarily of Alliance and InsSciDE members, who were invited to connect and exchange with local experts on critical matters of science diplomacy, the Arctic, environmental issues and relations with Russia following the invasion of Ukraine.

The morning of the first day began with a lecture by the European Commissioner for the Environment, Maritime Affairs and Fisheries, Virginijus Sinkevičius, at the Norwegian School of Fisheries. Commissioner Sinkevičius discussed the ambitions for the Arctic inscribed in the European Green Deal and outlined priority areas for moving forward with Europe’s blue and green transitions. While emphasizing that the greenest energy is the energy we don’t use, he discussed the importance of fostering science for sustainable solutions, eliminating development of hydrocarbons and building awareness of the global and cross-sectoral importance of the Arctic. “We must not neglect the basics,” he reminded, noting that ecosystems, the ocean, seas and soil are fundamental for life on Earth.

Then, the delegation moved to the Fram Center where they entered a far-reaching debate with with Special Advisor to the Norwegian Polar Institute Kim Holmén. He shared his analysis of the state of science diplomacy between Norway and Russia and mused that it may take 30 years to rebuild the trust that underpinned collaboration with Russia up until sanctions severed almost all official ties. Individual relationships struggle to stay alive but will be key to eventual normalization, a topic that would become ubiquitous across the many meetings that followed.

Venturing across the hall, the delegation received a tour of the impressive Akvaplan-niva labs, which conduct a variety of marine environmental monitoring that informs policy and governmental regulations. For instance, Akvaplan-niva’s sediment analysis ensures that fish farms are rotated in a timely manner to maintain the integrity of the environment. 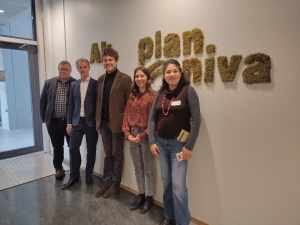 The Fram Center itself is a beacon of science diplomacy, the institution’s Research Coordinator Kathryn Donnelly explained in the next meeting. The Center is a major Norwegian government-funded facility in Tromsø that houses the Arctic Council Secretariat, the Arctic Indigenous Peoples’ Secretariat, the Norwegian Polar Institute, the marine research lab Akvaplan-niva, Norwegian Radiation Protection Agency (Northern Norway), and other research institutes. The building is bright and modern and buzzing with collaboration between the different institutions within, except for the office of the Arctic Council Secretariat, which has remained dark since its seven of eight members announced an indefinite “pause” in their work after Russia invaded Ukraine.

In the final session of the day, Lars Otto Reiersen, former Secretary General of the Arctic Council Arctic Monitoring and Assessment Program (AMAP), gave an engrossing lecture on scientific cooperation in the Arctic since the Cold War, a time when military bases and weapons systems were strewn across the region. Reiersen illuminated an incredible vastness in AMAP’s portfolio, discussing their work with rights of indigenous peoples, military challenges, exploitation of resources and pollution in various forms, from radioactivity and heavy metals to forest degradation and organic pollutants.

On the way out, the delegation stopped by the polar library of the Fram Center and dipped into the archive, where a remarkable collection of historic books by Norwegian explorer giants like Amundsen and Nansen line the shelves. 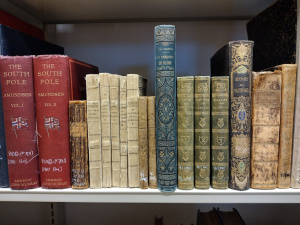 The second day commenced in the foyer of the Edge Hotel overlooking the icy waters of the  Tromsøysundet strait. There, the members of the delegation briefly met again with Commissioner Virginijus Sinkevičius to introduce the Alliance and the Norway-EU Science Diplomacy Network before posing for a photo. 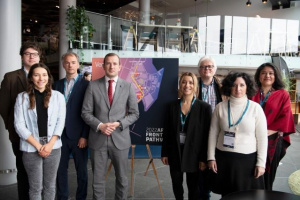 Subsequently, the delegation travelled up to the top floor of the hotel, where panoramic views of the city and mountains provided an impressive backdrop. In the first meeting, Maria Fossheim from the Norwegian Institute for Marine Research discussed the state of marine research cooperation, fisheries and science diplomacy between Norway and Russia in the Barents Sea. Fossheim explained that while fisheries – an issue of vital importance for Norway – constituted one of only three sectors not covered by sanctions, the reality of the conflict has made cooperation with Russia nearly impossible. She also highlighted that despite more than sixty years of Norwegian–Russian marine research cooperation, the future is now very uncertain. 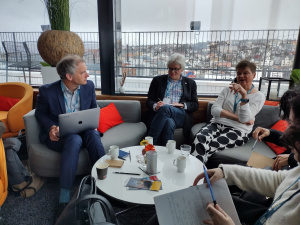 After, the delegation heard from Camilla Brekke, UiT Pro-Rector for research and professor of space technology, who provided a valuable glimpse of the UiT Rectorate’s science diplomatic approach in the current situation. The key question was on the freezing of institutional intellectual ties with Russia in light of the war. The delegation learned that UiT–which decided to revoke the honorary doctorate it awarded to Russian Foreign Minister Sergey Lavrov–is no exception to the trend of Western institutions cutting ties with their Russian counterparts. However, researcher-to-researcher contact may continue, although the reality in Russia makes it much harder than it sounds. Brekke noted that the focus is being placed on supporting Ukrainian researchers fleeing the conflict.

Jarle Aarbakke, former Rector of UiT and former mayor of Tromsø, soon joined in. He spoke of Tromsø’s history, the scientific and diplomatic achievements of Fridtjof Nansen, and of his own experience in establishing institutional ties between UiT and Russian universities when he was Rector. Also discussed was his role in awarding the honorary doctorate to Lavrov–along with then-Foreign Minister (currently Prime Minister) of Norway Jonas Gahr Støre–in 2011 for their work on finalizing the maritime delimitation between Russia and Norway in the Barents Sea. Jarle remarked that the decision to revoke Lavrov’s doctorate is justified given the circumstances of today, but the spirit in which it was awarded reminds us that cooperation was possible in the past, and thus may be again in the future too.

After bidding farewell to Aarbakke and the spanning views of the Edge Hotel, the delegation made its way to a tall, colourful building surrounded by a moat. This was the Norwegian College of Fishery Science at UiT. There, the delegation joined a workshop organised by Michaela Aschan on what and how PhD students should learn about science diplomacy. Presenters gave five-minute pitches on particular topics within science diplomacy –such as “what is science diplomacy?” by Rasmus Bertelsen or “history of science diplomacy” by Paul Berkman–that the audience was asked to vote on based on personal interest, value to their field, and room for contribution. Leonard Laborie and Daniella Palmberg spoke about the training experience of the InsSciDE project and introduced the teaching and learning resources collected on the EU Science Diplomacy Alliance’s website. The winner was Gunhild Hoogensen Gjøv’s pitch entitled “Comprehensive security and trust perspectives”. However, in reality, all pitches were winners in their ability to introduce an array of science diplomacy perspectives to a group of students new to the term.

Back at the Edge Hotel, the group participated in a panel for the Norway-EU Science Diplomacy side event of the Arctic Frontiers conference. Rasmus Bertelsen from UiT kicked off by introducing the Norway-EU Science Diplomacy Network. Léonard Laborie from CNRS then gave a succinct but informative overview of the InsSciDE project. Following that, Jenny Turton, Senior Adviser for Arctic Frontiers, introduced the implications that the conference has on science diplomacy; Lise Øvreås from UiB spoke of the Norwegian Academy of Science and Letters’ role in science diplomacy; and Tor Eldevik, also from UiB, spoke of the connection between science diplomacy and European Academies Science Advisory Council. Eric Piaget, from UNU-CRIS, then gave an intervention describing how the EL-CSID project evolved into UNTRAD, and plans for its upcoming presidency of the Alliance. Daniella Palmberg, from UNESCO, then delivered an overview of the Alliance as an emerging hub for science diplomacy resources and research cooperation, and highlighted the upcoming InsSciDE conference in Paris. Kleinsy Bonilla then gave an inspired presentation on how science diplomacy should be better connected to the so-called Global South. Finally, Lars Otto Reiersen ended the side event with the past, present and future of Arctic environmental science diplomacy.

Throughout the two days, the delegates also profited from intermittent exchanges with other notable officials and scholars such as Dag Rune Olsen, Rector at UiT and a cancer researcher; Ole Arve Misund, Director of the Norwegian Polar Institute; and Malgorzata Smieszek, UiT Project Coordinator and Researcher on Arctic governance and science-policy interfaces.

The level of interest and richness in the interactions were a strong indication of a bright future for the Norway-EU Science Diplomacy Network. It was a long couple of days, but the delegation was sustained by the endlessly enriching insights and knowledge of everyone they met. Oh yes, and by lots of coffee too. 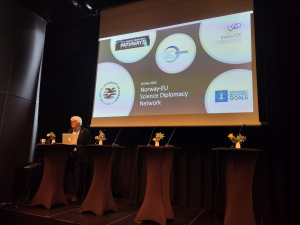 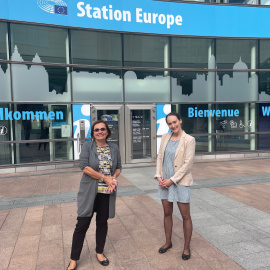 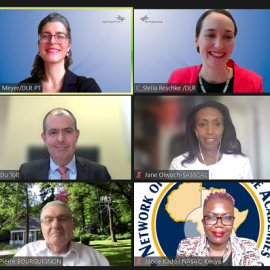 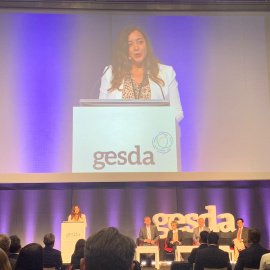