The Strategic Forum on International Cooperation published on 23 September 2021 the SFIC Opinion on the European Commission Communication „Global approach to research and innovation – Europe’s strategy for international cooperation in a changing world”.

[2.] SFIC reiterates the relevance of Science Diplomacy as an instrument for addressing global challenges and jointly achieving the SDGs. Mechanisms for science-based advice in EU and MS foreign policy benefit from advances in research (e.g. Azores Declaration contributing to the All Atlantic Ocean Research Alliance; new climate models). Moreover, research can also offer opportunities for foreign policy impact. Science Diplomacy can make use of these opportunities, when emphasizing aspects of open science, freedom of scientific research and innovation. SFIC underlines that a broader approach to Science Diplomacy by integrating education and youth (“Education Diplomacy”) has the potential to strengthen the synergies between international policy, education, research and innovation, and highlight the role of young people in building sustainable and trustful partnerships between countries.

[4.] Science Diplomacy for global challenges comprises a set of values, especially global scientific freedom. The Commission should consider setting up a dedicated fellowship scheme, or reinforcing the existing possibilities under the Marie Skłodowska Curie part of Horizon Europe, open to non-EU researchers whose freedom of scientific research is under threat in third countries, to position the European Union as a ‘safe haven’ for freedom of scientific research. The fellowship scheme could build on the proposal by the InSPIREurope consortium, make reference to the categorisation of threats developed by Scholars at Risk and complement national fellowship schemes.

Other aspects addressed in the opinion include the SDGs; International cooperation as a two-way process; Horizon Europe; Co-creation, cooperation between MS, the European Commission and Third Countries; Link to Higher Education and other policy fields; Research Infrastructures and Further implementation of the global approach strategy as well as Foresight; Measurement and Monitoring issues; Global standards and Geographic focus.

Science and Technology Agreements in the Toolbox of Science Diplomacy: Effective Instruments or Insignificant Add-ons? 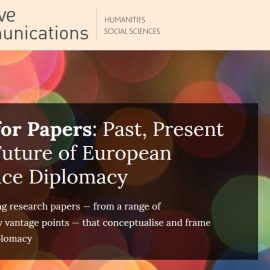 Reminder: Call for Papers ‘The Past, Present and Future of European Science Diplomacy’ still open until December 2019!