Whereas Science Diplomacy is a widely practiced area of international affairs, academic research on the subject remains rather sparse. The role of academia within the field of politics–science interaction has hardly been considered. This article therefore scrutinises this scholarly perspective, using a case study of a science diplomacy programme in Germany to explore  objectives,  benefits,  and  constraints  of  science  diplomacy  for  participating  scholars. While political approaches suggest an ideal world where both sides profit from the collaboration, the findings point to another conclusion, suggesting that the interaction of scholars and officials in science diplomacy is far more complex. Thus, the contribution is regarded as both a useful starting point  for  further  research  and  for  a  critical  reflection  of  academics  and  politicians  in  science  diplomacy practice to gauge what can be expected from the collaboration and what cannot. 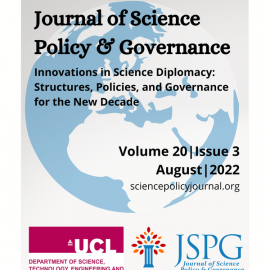 International Science and Technology Cooperation in a Globalized World: The External Dimension of the European Research Area