Already for the 13th time, re:publica 2019 is currently bringing together the European digital culture community for a 3-day event in Berlin (May 6-8), convening to discuss both current trends and technologies in the digital society. re:publica is Europe’s largest conference in this domain and attracts thousands of visitors every year to its various tracks ranging from digital to societal transformations to social innovation. For three days, visitors enjoy a mix of lectures and interactive workshops in maker spaces and exhibition stands. Anyone who can’t make it to Berlin can also follow the sessions via video or audio stream on the internet.

Pauline Ravinet from the S4D4C project took part in this year’s edition of re:publica, sharing the stage with Irmgard Maria Fellner (Federal Foreign Office of Germany) at the so-called “Lightning box” (a central stage at STATION Berlin where re:publica is held). The talk was moderated by Ralf Hermann, head of the German Office for International Cooperation in Vocational Education at BIBB (German Federal Institute for Vocational Training and Education).

Under the topic “Beyond frontiers: Education and Science Diplomacy” the two experts discussed the diplomatic value of science and education cooperation and gave examples of good practices therein. This “Lightning talk” (the conversation format featured at the Lightning box) was organised against the backdrop of Education Diplomacy (#EduDiplomacy) and Science Diplomacy (#SciDiplomacy) receiving evermore and increasing attention in education, science and research. Pauline Ravinet and Ms. Fellner outlined why Education diplomacy and Science diplomacy can build bridges for exchange and dialogue when relations in other policy fields have already hardened.

Both agreed that Science Diplomacy has become a well established concept by now, evidenced not only through several interesting national and international projects currently implemented. Yet the classical understanding of Science Diplomacy is overlooking educational issues. Looking at the UN Sustainable Development Goals (SDGs), education is crucial and both a right and vehicle for change and innovation. The two experts confirmed that the conceptual and practical scope of Science Diplomacy needs to be widened more towards educational issues allowing a better reflection on the still to-be-established concept of Education Diplomacy. 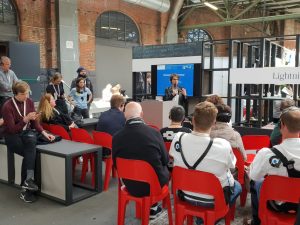 S4D4C project present at the re:publica conference in Berlin
Tagged on: featured