The first UNESCO World Conference on Science was held in 1999 in Budapest. As a series of follow-up events of this initial gathering following the initiative of the Hungarian Academy of Sciences since 2003, the World Science Forum (WSF) series has played a prominent role in bringing leaders of the world of science and policy together. The biennial WSF series aims to discuss the roles, responsibilities and challenges of science and presents our issues of common interest to the scientific community and the general public.

In 2011 WSF partner organisations agreed that the Forum should alternate between Budapest, Hungary and another host country. For the first time the Forum was hosted by Brazil in 2013 and then by Jordan in 2017. In 2022 it will be for the first time that the WSF is hosted on the African Continent. As host country, South Africa will strive to make the event a truly African event, inspired by the values of Ubuntu, which promotes the social nature of humanity, an event, which is inclusive and where the voices of those often ignored will be heard in debates responsive to the challenges of the developing countries.

Partner organisations of the World Science Forum series are: 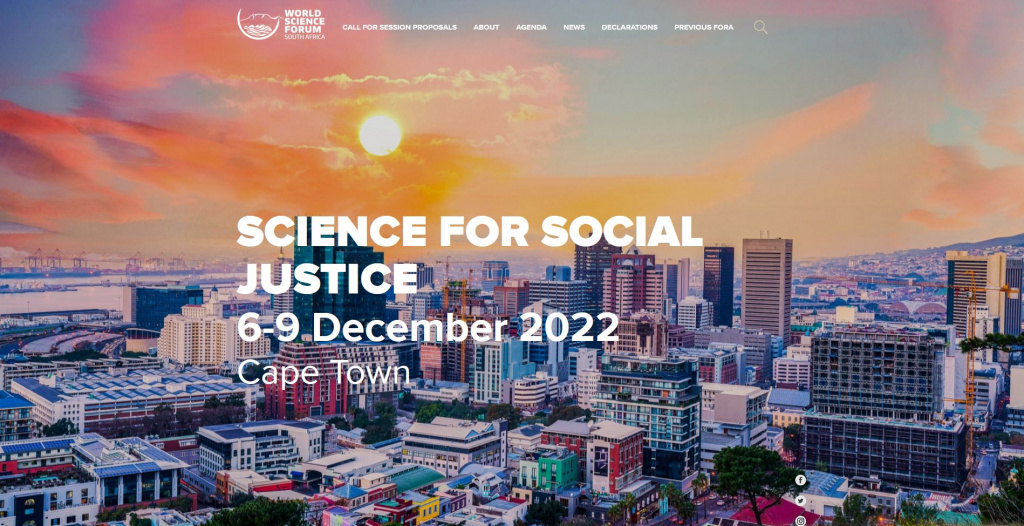 In these unprecedented times, marked by global challenges such as the COVID-19 pandemic, climate change and persistent poverty, science is called upon to make a critical contribution to create a more equal, fair and just world. This call for action informed the theme proposed by South Africa for the 2022 Forum as “Science for Social Justice”. Debates at WSF 2022 will therefore interrogate what role science should play in ensuring resources, opportunities and privileges in society are accessible to all and distributed in a fair manner.

The WSF 2022 will therefore discuss how the production and application of new knowledge could and should challenge inequality, injustice, environmental destruction and marginalization. The Forum will not only consider the role of science in advancing social justice, but also how the values of social justice, such as greater transparency and inclusivity, should transform the nature of the scientific enterprise to make it more responsive to the needs of society. Topics such as Open Science, research integrity as well as ethics and technology governance will be in the spotlight at the Forum.

International cooperation will be crucial to advance the cause of science for social justice, as it is for the response to all societal challenges. Science Diplomacy will, therefore, as is traditional, be an important focus of the WSF 2022. In this regard, special attention will be paid to the African agenda for science, technology and innovation and promoting greater participation by developing countries in global science.

The 2022 programme of WSF will provide an opportunity for the considerations of scientists, policy-makers, society, industry and science communicators to be challenged from a comprehensive standpoint in the plenary sessions, and allow for more technical debates over issues of science in thematic sessions.